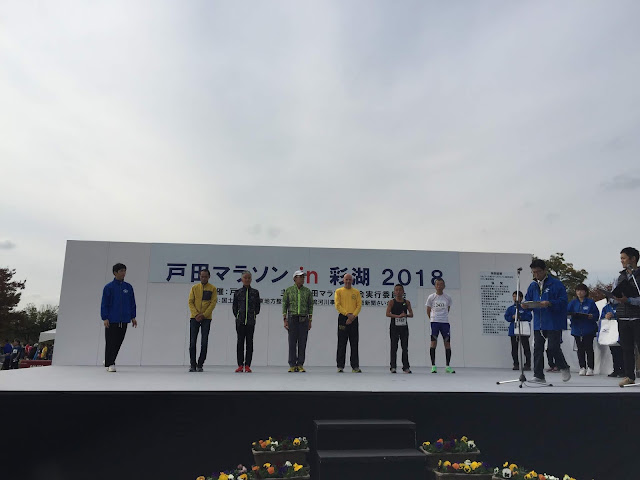 That was good enough for 4th place in the 60s age group — no 70s! — an oversight which I urged the organizers to remedy. (I urged that last year also, but maybe they'll finally pay attention.)
Prizes went down to 6th, so I got a nice shoe bag.

It was a fun day, the club had 20 people there, most in the half, some in the 10k, and everyone did quite well, with a few others winning prizes.

Of course, compared to 70-year-old Gene Dykes, who recently ran a 1:22 half, 1:34 is, well, good but not great. Gene apparently does quite a bit of overdistance, even 50k and over ultras, so maybe increasing my weekly long run to 24k and then 30k will put more strength back in my legs. Of course, I used to do that, so I think I should go back to that.
Since I don't like winter races, I won't run another half until maybe April, so let's see what happens then.

Dec. 2nd I'll run a 7.4k leg on an ekiden team, then no races for 4 months.
Hope to be in Singapore for part of the winter, visiting my daughter.

It's been one month since the 10K race, and now 10 days until the half marathon.
Training has gone pretty well, with no aches or pains, which is very nice! And the most important thing for good training.
(I do get occasional twinges of pain in my left knee when running hard, which is a bit scary, but so far nothing bad has happened.)

I said I wanted to start training harder, so have been doing the usual track intervals on wednesday nights, a half marathon pace tempo run on Saturday and a long run on Sunday, with minor variations.

I'm very wary of doing anything hard after a race, but after 3 days rest out of 5, was brave enough to try a 5K "race" on the high school cross-country course on the saturday after the 10K. They decided to let coaches run in the junior varsity races this year, so I decided to see what would happen. The result was pretty good — 20:58 on a quite tough course featuring two very long hills. Of course, you get to go down the hills also, but I think the uphills slow you more.

By the way, Ewen commented on my last post about training like Gene Dykes, the 70-year-old who ran 2:55 (which is back to back 1:27s, damn him!). I read two articles about him, which I loved. Best quote: "I train very hard." He's the best 70 year old in the world, so I guess I have to emulate him. Ewen: where did you find his training program? I'd like to take a look at it. Thanks....
Posted by TokyoRacer at 8:34 PM 1 comment: