Tues
Rest, work trip to Hamamatsu. Which is why I ran Monday.
Also good because I will run a 5,000m time trial Wed.

Sat
Left knee (muscle above/outside knee?) is slightly sore, so rested. Also doing a long run tomorrow with a lady. (If a lady invites you for a long run, you have to go, right?) 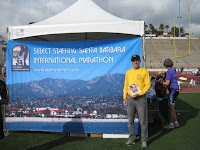 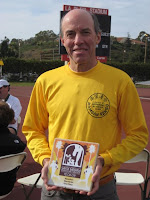 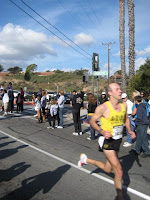 Some photos from Santa Barbara. Form is not too bad for the end of the race, right?

As for running again, actually, I have been running for the past 9 days (including today). And feeling really good. Ran easy Sunday and Monday (13th and 14th) and then pretty good runs from the 15th. Some very good, in fact. No soreness in the quads or anywhere at all. I guess the 18 weeks of training did in fact make my legs stronger. So I'm already looking forward to LA in March.

Sunday 13th
11k (approx) easy along the Tamagawa Josui. Now a tiny stream, but it was once one of the main water supplies for Edo (old Tokyo).

Rest tomorrow as I have to go to Hamamatsu.
Wednesday night is a 5,000m club time trial.
Posted by TokyoRacer at 10:14 PM 1 comment: