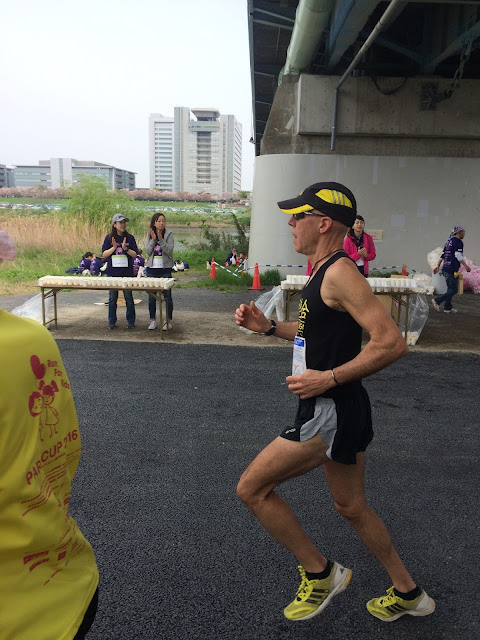 Not much running due to soreness in upper left leg. I don't really know what it is - it's not my glute, not my groin, it's kind of inside the leg - a strained ligament or something? I don't think it's serious - rest should cure it, which is what I am going to do from today.

Rested two days and did a 17.7k run on Saturday. This was a club run with 12 people, under the cherry blossoms and back to an onsen (hot spring facility) near my house. Went out easy and then came back at a pretty good pace, just to get some training in. The leg was only a bit sore, but got quite sore the next day (tried to run with some other club members at another cherry viewing party, but could only manage a very slow, painful jog).

So...didn't run all week until yesterday - Sunday the 10th - when I ran a half marathon race along the Tama River - the Paracup charity race, which had about 3,000 people.

The leg was still slightly sore, but I assumed it wouldn't get any worse and that I could run 21k without too much trouble, which turned out to be the case.

It was a fairly warm day, about 22C/72F, but it was cloudy and there was a breeze, so it didn't feel too hot.

There were two other guys with me in the Half, club member Padraig and Gareth, a visitor from London (who had just gotten off the plane!), so we planned to start, and maybe finish, together. I said about 4:45/km pace would be nice, and that's what we ran, after two faster kms at the start.
4:45 is a 1:40:13 half, although I thought I would slow down. However, my plan was that if I felt good, I would pick up the last 5k.
We stayed together until 13k and I did in fact feel ok, so decided to pick up the pace a bit with about 7.5k to go (course was 2.5k out and back, that is, 4 5k laps, with a bit extra).
Was running 4:50/k but picked it up to about 4:40, leaving the other two, then with 5k to go picked it up again to about 4:34.
Slowed a bit the last 2k as my quads and glute were getting more sore, but held on pretty well and even outkicked a guy who was trying to pass me.

Final time was 1:40:10, almost exactly the pace I was hoping for (but didn't really think was possible, with not much, well almost no, training the previous month and on a very warm day). So quite satisfied with that.

Will now rest until my weird little injury is healed and then come back strong!
Posted by TokyoRacer at 12:19 PM 3 comments: